This is a general guide to how bus lanes are enforced, including CCTV camera locations, who can use bus lanes, and under what circumstances you can use one if not usually permitted.

Bus lanes are enforced by:

Fixed enforcement cameras operate at the following locations in Belfast:

*Due to a change in traffic arrangements in the area to allow for building development works, the CCTV enforcement cameras in Castle Street have been switched off until further notice.

If the CCTV camera detects a vehicle illegally driving in a bus lane, it will automatically record a minimum eight-second long video of the vehicle for the purposes of evidence.

Note that there is no camera flash to show that the camera has been activated when it detects a vehicle that is not permitted to drive in the bus lane.

The mobile CCTV vehicle enforces bus lanes during their operational hours. The CCTV operator manually records a video of any vehicle that is not permitted to drive in the bus lane.

If a contravention of the bus lane is confirmed by the reviewer then a Penalty Charge Notice (PCN) will be issued to the registered keeper of the vehicle.

There is specific legislation in place for each bus lane which determines when the bus lane is in operation and which vehicles are permitted to use it. Normally the bus lanes can be used by:

A bus, cycle, motorcycle or permitted taxi may only wait in a bus lane long enough to allow a person to get in or out of the vehicle. The maximum period of waiting is two minutes.

The days and times the bus lanes are operational are clearly displayed on the signs at the start of each bus lane and at regular intervals along the bus lane. It is important to check bus lane signs to confirm the hours of operation and if your vehicle is permitted to use it.

Note that bus lanes are operational on all bank holidays in Northern Ireland.

When you may enter a bus lane

Vehicles may enter a bus lane to avoid an accident, with the direction or permission of a police officer in uniform, or to allow the vehicle to be used:

Unless your vehicle is permitted to use a bus lane, during its operational hours you can’t enter, drive in, or wait in a bus lane:

An exception to this is on arterial routes where the bus lanes operate from 7.00 am to 7.00 pm, where the sign below is shown, you’re allowed to stop in the bus lane to load or unload goods between the hours shown on the sign. 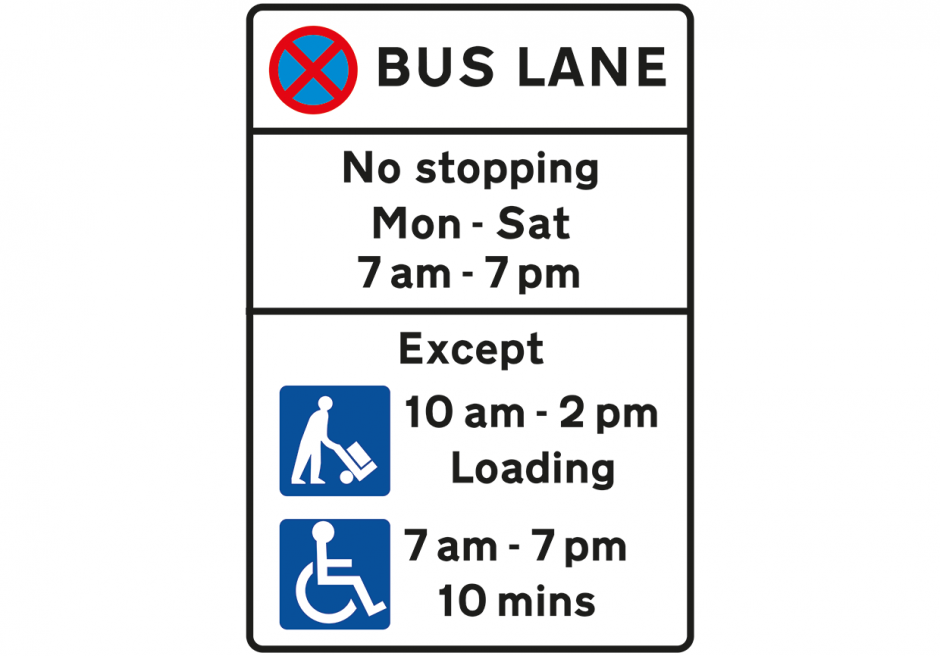 Also, a vehicle displaying a Blue Badge is allowed to wait for up to 10 minutes to allow a person with a disability to get into or out of the vehicle.

You can cross a bus lane:

The enforcement of infringements of the bus lane regulations is carried out in a pragmatic and sensible way using video clip evidence. Each case will be treated on its merits by the Department for Infrastructure and it will adopt a common sense approach when reviewing the video clips.