Tests that include independent driving or riding

The independent driving or riding section is included in the following practical driving tests:

Examiners give candidates step-by-step instructions during the test, apart from a section where the candidate will be asked to drive independently.

In the independent driving section of the test, you'll have to drive independently by either following:

To help you understand where you are going when following verbal directions, the examiner will show you a diagram like this: 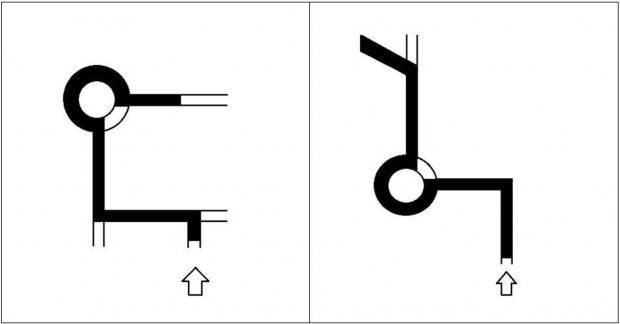 It doesn't matter if you don't remember every direction or if you go the wrong way - that can happen to the most experienced drivers.

Independent driving is not a test of how you follow directions. Driving independently means making your own decisions - this includes deciding when it's safe and appropriate to ask for confirmation about where you're going.

If you ask for a reminder of the directions, the examiner will confirm them to you.

Going off the independent driving route

If you go off the independent driving route it won't affect the result of your test unless you commit a driving fault.

If you go off the route or take a wrong turning, the examiner will help you to get back on the route. You can then continue with the independent driving.

If there are poor or obscured traffic signs, the examiner will give you directions until you can see the next traffic sign. You won't need to have a detailed knowledge of the area.

The Driver & Vehicle Agency (DVA) has procedures to help identify candidates who have special needs and/ or disabilities when tests are booked. The examiner then knows which type of special needs you have so reasonable adjustment can be made.

For the independent driving section, this could be by asking you which method you prefer - following traffic signs, following a series of directions (a maximum of three), which are supported by a diagram or a combination of both.

If you speak little or no English

Driving examiners are very experienced at dealing with candidates who speak little or no English. For example, sometimes they will write place names so it is clear to you where you're being asked to drive to.

You can have an interpreter along with you on your test if you wish. Your approved driving instructor can act as your interpreter.

Test routes are not published

To help make the driving test more representative of real driving, DVA does not publish details of test routes. This is so you can show your ability to drive safely in realistic driving situations, rather than memorising a particular test route.