Talk to your child about alcohol and drugs

Many teenagers will be spending more time with friends over the coming months, possibly going to parties, gigs, festivals, or even on their first solo holiday. Parents are urged to talk to their children about the risks associated with drinking alcohol and taking drugs. 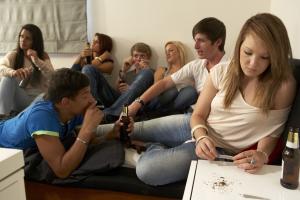 Parents’ attitudes to and behaviours about alcohol and drugs have a strong influence on their children.

Parents can make the first move and talk frankly about the dangers of binge drinking and encourage their children to have fun with friends without alcohol.

If their child is of the legal drinking age, parents should encourage them to take care if they choose to drink.

Staying within the safe drinking limits is important, as excessive drinking can have lasting effects on health, such as damage to the liver, heart, brain and stomach.

Peer pressure can be a big issue in drinking too much, so parents are also urged to highlight the dangers around getting caught up in behaviour such as drinking games, which can be highly dangerous.

Parents are also encouraged to talk to their children about drug use and the risks associated with it.

The misuse of any drugs, including prescription medication that hasn't been prescribed for them, can result in damage to health, or even death.

You can also never be exactly sure of the make-up of recreational drugs, whether sold as illicit drugs or as ‘legal highs’.

It is strongly recommended not to take them.

Parents can play an important role in helping young people to understand these risks, so they don’t choose to take drugs without realising the harm they could be exposing themselves to.

The only way to avoid risks is to not take drugs which have not been prescribed for you by your doctor.

Peer pressure is also an issue when it comes to drug taking. Many young people will try things out because their friends are. But with drugs, the risks are huge.

The main risks when using drugs include taking too much of a substance, taking a substance over an extended period of time, 'bingeing', and mixing drugs with other drugs and/ or alcohol.

You can get more information about drugs on these pages:

If someone has taken drugs and is feeling unwell, seek medical help urgently.