Blepharitis is a common condition where the edges of the eyelids (eyelid margins) become red and swollen (inflamed). Blepharitis can develop at any age.

Symptoms of blepharitis can include: 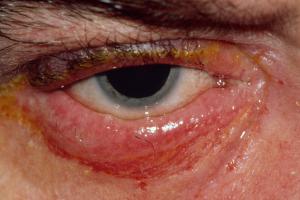 In most cases both eyes are affected. One eye can be more affected than the other.

The symptoms tend to be worse in the morning.

When to get medical advice

See your optician (optometrist) if you have persistent symptoms of blepharitis that aren't being controlled by eyelid hygiene measures.

They can examine you to check if the problem is caused by an underlying condition. They may also refer you to an eye specialist.

Contact your optometrist or GP immediately if you have any sudden severe symptoms, or your vision is suddenly reduced. If this isn't possible, visit your nearest emergency department.

How blepharitis is treated

Blepharitis is usually a long-term condition. Most people experience repeated episodes, separated by periods without symptoms.

It can't usually be cured. A daily eyelid-cleaning routine can help control the symptoms and prevent permanent scarring of the eyelid margins.

There are three main steps to eyelid hygiene that should be carried out once or twice a day:

More severe cases may require antibiotics. Your optician (optometrist) or GP can advise you about the best treatment.

There are three main types of blepharitis:

Anterior blepharitis can be caused by either:

Posterior blepharitis is caused by a problem with the Meibomian glands. This is where the glands get blocked by either debris, skin flakes or inflammation.

Sometimes blockages in the Meibomian glands are associated with a skin condition called rosacea. If too much oily substance is being produced, this may be caused by seborrhoeic dermatitis.

Mixed blepharitis is the most common. It is caused by a combination of both anterior and posterior blepharitis. Blepharitis isn't contagious.

Health conditions A to Z

Or find conditions beginning with A to Z…

Skip A to Z menu