There are many non-native plant species in Northern Ireland which don’t cause problems. A few, however, can become invasive and upset the balance of the ecosystem. They are often bigger, faster-growing or more aggressive than native species and may take over the habitat where they grow.

There are several steps you can take to stop the spread of invasive plants, including:

In Northern Ireland, the Centre for Environmental Data and Recording (CEDaR) collates wildlife records for both native and invasive non-native species.

You can record your sightings on their website either as a single record event or you can register with them and send details through a free online account.

Japanese knotweed, giant hogweed and Himalayan balsam are three of the most common invasive non-native plants in Northern Ireland. 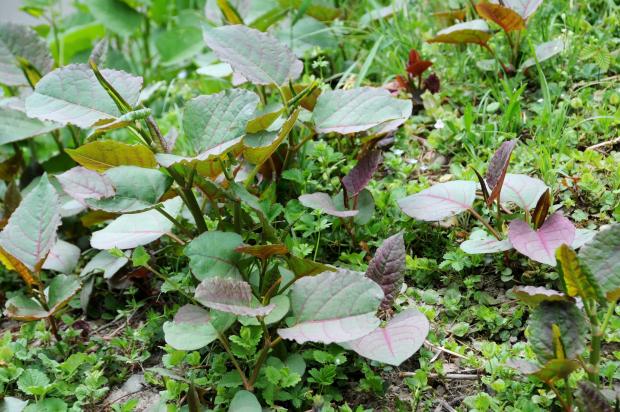 It forms dense clumps which can be up to three metres in height. It has a hollow stem, similar to bamboo, but is often flecked with dark purple. The leaves are heart or shield shaped and the flowers are delicate and creamy white.

It is now widespread in many habitats, particularly roadsides, riverbanks, railways and derelict land where its movement is unrestricted.

The main way it spreads is through the deliberate or accidental movement of rhizome fragments or cut stems.  It is difficult to control due to its extremely deep root system, which can grow up to three metres in depth and seven metres horizontally.

Tiny fragments of its root, as little as 0.7 g, can produce a plant. The plant can grow as much as two centimetres a day, in any type of soil. It can grow through hard structures such as walls and concrete if there is an existing fault or crack.

It is not harmful to human health. 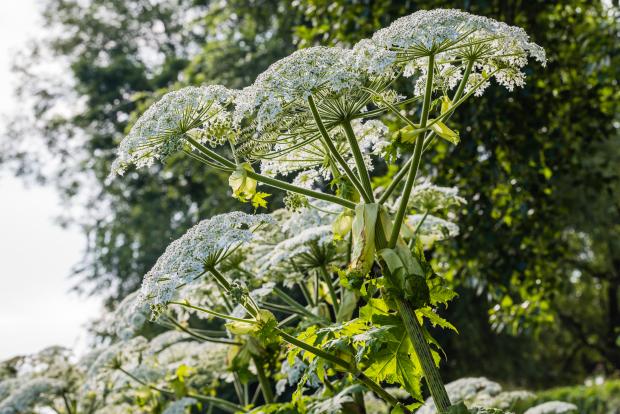 Giant hogweed is easily distinguishable from the similar native hogweed and cow parsley due to its sheer height which can reach three to five metres.

It is most commonly found in areas of damp soils, such as river banks.

Each flower head can produce up to 50,000 seeds which are easily dispersed by flood water, meaning it can quickly take over an area. Its seeds can live for up to 20 years, so treatment must be continued until the soil seed bank is fully exhausted and no further growth is observed.

Giant hogweed is listed as an Invasive Alien Species of Union Concern in European legislation, and cannot be sold, exchanged, cultivates or released into the environment. Giant hogweed has been identified as a Widely Spread Species in Northern Ireland.

Giant hogweed contains a sap which irritates skin when it is exposed to sunlight. Symptoms are usually noticeable within 24 hours and include blistering and swelling on the skin, which may be made worse by over-exposure to the sun.

If you come into contact with it, cover the affected area immediately to avoid exposure to the sun. Wash the area with cold water. If blistering occurs or the contact was with the eyes, you should seek medical advice. 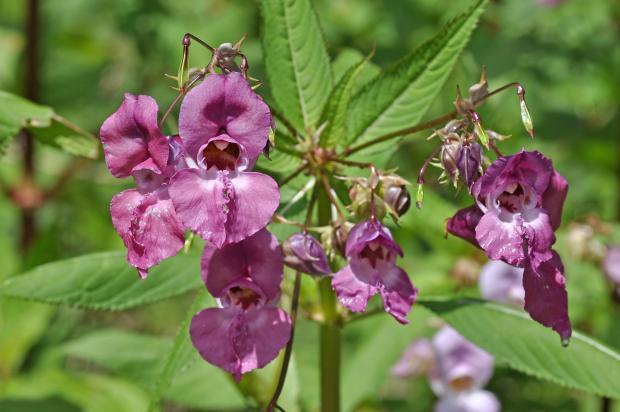 It is commonly found in areas of damp soil such as river banks and nearby woodlands.

The plant can produce large quantities of seeds in exploding capsules that can throw seeds several metres away from the parent plant. This enables it to quickly take over the habitat it occurs in.

Himalayan balsam is listed as an Invasive Alien Species of Union Concern in European legislation, and cannot be sold, exchanged, cultivates or released into the environment. Himalayan balsam has been identified as a Widely Spread Species in Northern Ireland.

It is not harmful to human health.

More help on how to identify and treat Japanese knotweed, giant hogweed and Himalayan balsam can be found on the Invasive Species Ireland website.