Dangers of starting a fire deliberately

Deliberate fire-setting is dangerous and can have extreme consequences. Keep an eye out for anyone starting fires deliberately and report any suspicious behaviour to the police. Act responsibly and don't make hoax calls or attack firefighters. 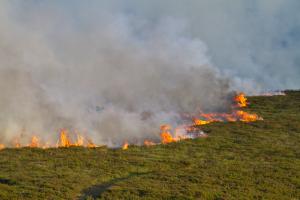 When someone starts a fire deliberately, they are putting not only firefighters’ lives at risk, but also their local community.

These fires can easily spread and even a slight change in wind direction can pose a serious risk to life, property and the environment.

Fighting these fires also means that firefighters and appliances are taken away from other duties and are unable to respond if another emergency call comes in.

Gorse fires can be a serious problem. It’s not just the larger fires on hillsides and mountains that can be a problem. Smaller fires involving grass and bushes also need to be dealt with quickly as they have the potential to spread and develop into bigger fires.

The majority are believed to be started deliberately, but some are started accidentally.

They can be caused unintentionally by thoughtless and careless behaviour.

You can find out more about fire safety at this link: